There was Rodeo. It started as a contest between cowboys to see who was the best roper and rider. 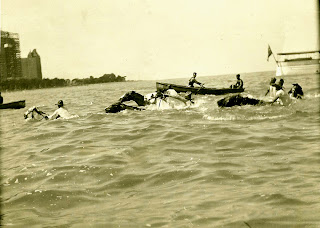 Soon it evolved into ranches competing against each other to see who had the best cowboys - much like a ranch rodeo of today. Before long, organized events were taking place in towns like Prescott, Arizona which claims to have the world’s oldest rodeo (started in 1888) and Payson, Arizona who argues they have the world’s oldest continuous rodeo (started in 1884). Then you have Pecos, Texas who claims the right to the world’s first rodeo (1883) but history tells us that William F. Cody (AKA Buffalo Bill) staged his first Wild West Show (which also had rodeo events) in 1882 at North Platte, Nebraska.

But wait! There is more; Santa Fe, New Mexico also claims the first rodeo based on a letter dated 1847 written by Captain Mayne Reid from Santa Fe to a friend in Ireland: "At this time of year, the cowmen have what is called the round-up, when the calves are branded and the fat beasts selected to be driven to a fair hundreds of miles away. This round-up is a great time for the cowhand, a Donny-brook fair it is indeed. They contest with each other for the best roping and throwing, and there are horse races and whiskey and wines. At night in clear moonlight, there is dancing on the streets."

Many will argue exact historic dates of the sport, but none will doubt the birth of rodeo was a contest of the cowboy.

In the early 1900s, rodeos were largely unorganized and scattered. The events as we know them today were mostly acts mixed in with wild west shows - which were more common at the time than a rodeo, as thought of in today’s terms. As a matter of fact, rodeos and wild west shows enjoyed a parallel existence in the early days and one was really not much different than the other (they even had a lot of the same stars and contestants).

Many towns held annual “rodeos” but these shows were more commonly known as cowboy contests, stampedes, frontier days celebrations and of course, wild west shows. The term rodeo was not widely used until organization started to infiltrate the sport (in 1929). While rodeo had become a way of life for a select few in its earliest days, there was no standard to the event schedule, rules, judging, etc.. You might have a steer roping sandwiched between an Indian relay race and a shooting exhibition. Then they might go on with saddle broncs and steer wrestling followed by the “chicken pull” and trick roping. It’s been said there were over a hundred different events or acts to choose from, including a unique event held each year at Chicago where mounted cowboys went to lake Michigan, were floated out on a barge, and were then forced off, having to swim their horses several hundred yards back to shore! The first one back was the winner. Buffalo Bill Cody obviously had the most recognizable wild west show, and his show was more act and less rodeo, but rodeos of the day were a lot more wild west show than you think of in terms of your typical rodeo today.

These shows were very entertaining and popular with the crowds. However, cowboys competing in these performances were not thought of like a modern independent cowboy athlete is today. The organizers thought cowboys should be happy with cowboy wages and payouts for winning events were reflective of this mindset. At the time, cowboy wages were about a dollar per day ($30 a month). So if a cowboy could win (or was paid) that much, or sometimes even up to $100 for winning an event, he ought to be happy - and most were. Many cowboy from back in those days have been quoted as saying that winning a hundred dollars or so at a rodeo was more money than they had ever seen at one time in their whole life and that is what got them hooked on the shows. There were problems with this system however.

Cowboys still had to pay an entrance fee, much like today, and the amount of fees paid by the contestants was not reflected in the winning payout. Then there was the problem of each producer or town having their own ideas of how the show should be ran and which events to include. There was little standard in judging the riding events and rules varied from place to place. Then there were always those few who worked the system to their advantage and sometimes winners were determined before the show even started! (Unofficially of course.)

Accusations of bribes and crooked judges ran high. The rodeo cowboy became disgusted with this situation over time. It took a while, but he finally realized he was the star of the show; folks paid to see him perform, and he was not getting a fair share. There were thousands of dollars being made on some of the bigger shows from ticket sales and contestant entry fees, but only a few hundred would be paid back to the winners. This was fine for a few, but it was starvation for the overall lot. Just enough was being paid out to keep them coming back, with hopes it would be their turn to win the next show; kind of like dangling the proverbial carrot.

All of this changed however in 1936. That was the year professional rodeo was born. Rodeo organization was actually started in the northern states in 1929 with the formation of the Rodeo Association of America (RAA). This association was made up of managers and producers and did not include the cowboy in decision making and therefore was often contentious, seldom recognized and eventually it was merged with the Cowboys Turtle Association (CTA). They called themselves “turtles” because they were slow to organize but eventually stuck their heads out. They were the first cowboys to have a say in how the show ran. In 1945, the Cowboys Turtle Association changed their name to the Rodeo Cowboys Association (RCA) and in 1975 it was changed to the Professional Rodeo Cowboys Association (PRCA).

It was Boston Garden, 1936, and the cowboys were fed up with one Colonel  William T. Johnson of Texas; promoter and organizer of major rodeos such as Madison Square Garden and the Boston show. While Johnson had a knack for producing spectacular shows and attendance was usually high, he refused to listen to the complaints of the cowboy. So they went on strike, demanded their entrance fees be added to the payout and that standard rules and judging be implemented.

Johnson was livid and told the cowboys to leave the grounds; he would put on a show without them. As they rode out of Boston Garden, a-horseback, the press was there taking pictures. The press sympathized with the cowboys and the public was soon on their side. That night Johnson attempted to put on the performance using stable hands, grooms and wild west performers. The cowboys sat in the audience and booed. It became such a spectacle, with a poor performance, that the audience joined the cowboys in their disapproval. The Boston committee told Johnson to stop the show and work with the cowboys. Johnson said, “I’ll drive my stock into the bay before I give into their demands!” Cowboy Hugh Bennett, one of the strike organizers hollered, “We’ll saddle up and help you!”

Johnson eventually agreed to negotiate when the managers of the Garden told him to come to an agreement with the cowboys or he would be thrown out as well. Negotiations lasted throughout the night and into the next day, however, an agreement was finally reached. The seed of professional rodeo had been planted. There were sixty-one men who signed the original document which eventually led to the formation of the Cowboys Turtle Association that fateful day in Boston. Only one of those men remain alive at the time of this writing, Bart Clennon was a contestant at the Boston Garden show that October/November 1936. He turned 102 on November 5th, 2012. More on Bart soon.