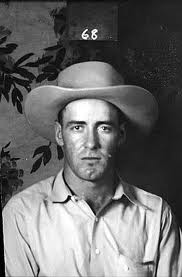 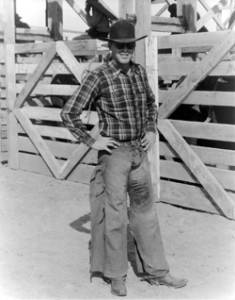 Clay Carr - Second All Around Champion of the World

Clay Carr is not a household name (like many of his contemporaries) when discussions about old-time rodeo greats are held. However, this quite and unassuming man was a two-time World All Around Champion Cowboy (1930 and 1933), won World Championships in saddle bronc riding in 1930 and steer roper in 1931 and 1940, competed in six events (saddle bronc riding, single steer roping, steer wrestling, team roping, calf roping and wild cow milking) and was (in his day) called a throw-back from the old-time cowboys who came before him. Clay was the real deal.
He was born April 18, 1909 in Farmersville, California and grew up working on the Gill Ranch. He competed in his first rodeo at Visalia in 1928 and within two years, was the second man to win the honor of All Around Champion of the World (Earl Thode was first in 1929). Most of his adult life, he lived on his California ranch near Visalia, where he also rodeoed out of.
In spite of being such a versatile and accomplished cowboy, one of the reasons you may not hear as much about Clay is that he went about his business without much fanfare. Some men have the spotlight follow them wherever they go (even cultivating and craving it), while others go humbly about their business. Clay was the latter.
Author Clifford Westermeier wrote of Clay in 1947, “Clay Carr, holder of the Jo Mora Salinas Trophy, is a strange man, difficult to meet and extremely hard to get acquainted with. He is, without a question, one of the great cowboys of the age; a man of many complexes, one of which is inferiority; yet he is one of the smartest, shrewdest, and cleverest individuals is rodeo. He has an air of indifference toward the desires and opinions of others, and appears to lead a rather lonely life, perhaps because he has a very suspicious nature? In spite of this, Clay has the respect and admiration of everyone in the business and is regarded as a very tough customer in a business deal, fight, or a poker game.
“One does not try to figure out this man of moods, but rather accepts whatever friendship he offers; one is flattered by any politeness, consideration, interest, or attention he may show. He seldom goes east to contest, but in the West and particularly at the California shows, he is a master and can “take,” in his own inimitable way, most of the boys competing against him.”
Following his death in 1957, the Visalia Times-Delta wrote, “He was not a man for sentiment and cared little about his own personal aggrandizement.”
Roger Bean of San Francisco once said Clay, “...was not of the new breed, but was somewhat of a throwback to the old-time cowboy.”
Not one to worry much about the opinion others, Carr, at times, wore unusual hats for a cowboy of that era. One hat he wore for a while had a very wide brim and low crown (similar to that of a Quaker, or more recently might be thought of as a modern “buckaroo” style hat) and another he often sported was a fedora style—at the opposite end of the spectrum. It is thought he wore these simply because they were available and definitely not to make any sort of a statement. Little things like this only added to the strangeness and separateness of this great cowboy.
Although the Bowman brothers from Arizona have been credited with hauling the first horse trailer seen on the rodeo circuit in the 1920s, Clay was known as having one of the first “nice” ones. His was constructed of metal (unheard of at the time). It was a one-horse trailer that stood out from the few being hauled at the time and was reported to have been “neatly painted and stylish.” This was also out of the norm back then.
Although he was a full-time rancher and tough rodeo competitor in the West, Carr did take a few extended rodeo trips, most notably to Australia, England and back East where he won his All Around and World Championships. He was known as a versatile competitor (competing at both ends of the arena) and was counted to be “in the money” most anywhere he went.
The fledgeling Cowboy Turtles Association (organized in 1936), which is the predecessor of today’s Professional Rodeo Cowboy Association, received Clay’s support. He signed up and was member number fifty-five. Clay wound up competing in rodeo for over twenty-five years.
Carr served in World War II as a Marine in the South Pacific. In 1948, he married Eleanora Curtis, from the well-known Curtis rodeo family. Sadly, on his birthday in 1957, Clay Carr, one of the best (and possibly most mis-understood) cowboys from the early days of rodeo passed away from a heart attack.
Because a he shied from the spotlight, may have been a little reserved and different, he never received the wide-spread recognition like many of similar accomplishment have. Sadly, his is not a name often talked about in discussions of rodeo history today. This does not mean however that a man of such great talent went completely unnoticed. As an All Around World Champion, Clay Carr was inducted in the ProRodeo Hall of Fame in 1979. 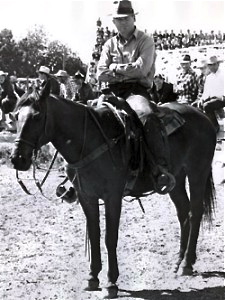