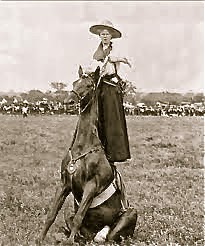 To see a petite young lady roping and tying a steer or performing stunts a-horseback is special. To do it in the early 1900s, an era of rough and tough, “real” cowboys, and do it as well as, or better than the men is incredible.