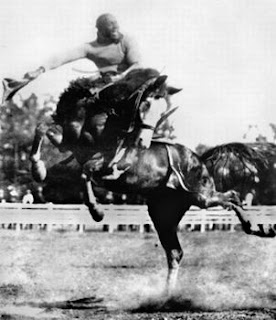 Most everyone has heard of Bill Pickett, the man credited with inventing the bulldogging event of rodeo. Bill was also the first black man to be inducted into the National Cowboy and Western Heritage Museum Hall of Fame and is often referred to when people talk about historical black cowboys. A lot of people may think Bill was about the only black man to make a name for himself in those early days of Wild West Shows, Stampedes and Rodeos because he garnered so many headlines.
Arguably however, one of the best bronc riders of all time was another black man, Jesse Stahl. Jesse was a professional bronc rider from the early 1900s thru the late 1920s. Things he did while riding a bronc are the stuff legends are made of and are still talked about to this day.
Not a lot is known about Jesse’s childhood. Most reports say he was born in Tennessee sometime between 1879 and 1883. Others say he was born in California or Texas. What we do know is he had a brother named Ambrose who also rode broncs.
Rodeo Historian, Willard Porter, wrote about Jesse, “He was a tremendous athlete—quick, coordinated and physically able to respond to the unpredictable action of rough stock.”
Jesse competed in bulldogging, steer (or bull) riding and bronc riding. He became legendary however for his bronc riding skills.
We first hear of Stahl at a big-time show in Salinas, California in 1912. The attendance of that event was reported at around four-thousand spectators. It was the first time Cowgirls were included in the performance and it was also the first time a black man performed there.
One of the highlights of the show was reportedly was none other than, Jesse Stahl, riding a bad bucker named, Glass Eye. After being awarded third place, Stahl climbed aboard again, on an exhibition horse who had a bad reputation as well. He rode this bronc facing backwards!
Why did he ride this exhibition horse? Why did he ride facing backwards?
Although Salinas was the first big show we hear of Stahl riding at, he had probably been competing at smaller venues for quite some time before. Stahl later became known for his famous exhibition rides. He usually did this facing backwards or with a suitcase in his free hand or on occasion in tandem with another black cowboy, sometimes George Fletcher or Ty Stokes, in what was dubbed as the “Suicide Ride.” Many felt he did these outlandish exhibitions just to prove he could ride better than anyone else. Other reasons have also been given.
It has been said that Jesse was mostly remembered for winning (or earning) first but placing third. Accusations abound that Jesse was never placed higher than third by judges because of his skin color and prejudices of the day. Many have reported that Stahl put on these extraordinary exhibitions to mock the judges for their placing decisions. Perhaps skin color had something to do with being placed third when everyone else thought he placed first, but if he was truly mocking the judges, that probably did not help either.
It is also said that some white cowboys would refuse to compete if Jesse was entered. Perhaps because of prejudice and Stahl’s reputation as one of the best bronc riders around, these men did not want to enter because they thought it would make them look bad if they were bested by a black man. This could be another reason Stahl rode so much in exhibition.
Producers desperately wanted Stahl to ride in their shows because it pleased the public. It has been speculated they could make everyone happy by paying Stahl to ride exhibition horses instead of competing.
To mock Judges for perceived bad decisions? To prove he was the best? Because of prejudice and segregation? All of the above has been suggested as reasons why Jesse Stahl rode so many exhibition horses while preforming wild stunts at the same time. What ever the reason may be for the extraordinary rides, they have become fodder for numerous tales and legends.
After a long and colorful career in which he made headlines from New York to California, the great Jesse Stahl retired from bronc riding in 1929. Most rodeo historians say he was one of the best ever. He died in Sacramento, California in 1935. The first well-known black bronc rider, was posthumously inducted into the National Cowboy and Western Heritage Museum Rodeo Hall of Fame in 1979. Making him the second black cowboy (after Bill Pickett) to receive such an honor.